Common brewing advice in American home
brewing is to let the Kraeusen fall back into the beer after primary
fermentation finishes. Very few brewers question this advice.
However, all the German books I have read about brewing and some
American home brewing books state that the bitter gunk on top of the
Kraeusen should be removed. If it is allowed to fall back in the beer
it will impart a harsh bitterness. As a result I have always
fermented in 5 gal carboys and removed the Kraeusen through blow-off.

In order to find out how much taste
difference that makes I set out to conduct an experiment. I brewed
two batches of my Altbier. Both were fermented in buckets. On the
first batch I allowed the Kraeusen to fall back into the beer. In
fact I helped it a little towards the end since I needed to rack the
beer before it was completely fermented. This however should not
invalidate the results since most brewers leave the beer in their
carboys well past the end of primary fermentation and until all
Kraeusen has fallen back. For the second batch I skimmed the brown
gunk off the Kraeusen regularly.

Both batches finished fermentation
during a maturation phase in a corny keg before they were moved to 4
C to settle the yeast and precipitate haze. Since they were still
cloudy after 2 weeks I added 3.5 g (½ pack) dissolved gelatin to
each keg which helped clearing the beer.

The following table outlines the
brewing process used for both beers:

*) that pH value doesn't make sense to me. It should not be higher than the pre-boil pH and not that much different from the pH for batch B. But I did take the pH measurement on a sample of wort that had been standing unpitched for 24 hrs as opposed to the batch B post boil pH which had been taken the same day. 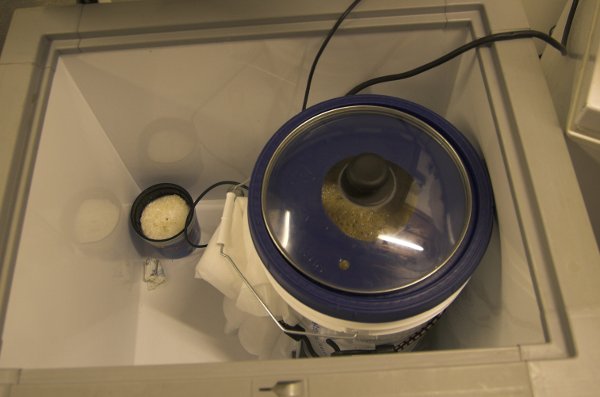 Both batches were fermented in buckets. A clear pot lid kept contamination out and provided easy access to the Kraeusen. The picture shows the batch A. The opening in the blue bucket lid was later enlarged to allow regular Kraeusen skimming for batch B.

I presented the beer as a double blind
(participants didn't know the difference ) triangle test to 7 club
members. Only 3 were successfully able to tell the difference. Those
who were able to separate the beers correctly reported the following:

I was very surprised how few were able
to tell a difference which appears so clearly to me. So I poured
myself 3 triangle tests and have to admit that I only got 2 correct.
Though I knew what to look for it wasn't as easy to keep the beers
apart since the lingering bitterness of A seems to stick with one for
longer enough to affect the taste of the next beer.

While this was a double blind triangletasting at a club meeting it was fairly unorganized. I didn't not get to start before many of the participants already had other beers. The setting was also not as quiet and free of distractions as one would expect for a taste testing.

The difficulty to differentiate the
beers in blind tasting may explain why some brewers, who have tried
this experiment before, found no difference and thus claim that it
doesn't matter if the brown Kräusen gunk is removed or not. The type
of beer may also play a big role. I can imagine that a hop dominated
highly bitter IPA may not show the difference or may even provide a
case where the beer, which didn't have the Kraeusen removed, is
preferred. Having done this experiment and tasted the difference I'm
convinced that the Kraeusen needs to be skimmed or blown off for any
German style beer. The type of harsh and lingering bitterness, which
I experienced in A, is considered a flaw even in the more bitter
German styles like Northern German Pils and Altbier. The bitterness
should be clean and linger only little. When it fades in the after
taste is should never reappear later. The only German beer where I
had this happen to me was Oettinger Pils which is one of the cheapest
beers you can by there.

The results are in line with similar experiment reported in Zymurgy. The article can be
read at the AHA forum.

When I sat down for lunch today I had 2
bottles of this beer and thought I poured the good one. After taking
the first gulp I noticed that I got the wrong one. To me the taste
was so bad that I poured it down the drain and poured the other beer
which I was able to enjoy. I'll likely only finish beer B and pour
out beer A.

Removal of the bitter Kraeusen gunk
makes a difference in the quality of the beer even though it may not
be detected by all brewers. The outcome of this experiment is enough
to suggest that interested brewers try this on their own to see if it
can improve the quality of their beers.

(1) to make up for my own failure to pass 3 triangle tests with this beer I set up a different taste test tonight. I took 12 identical glasses. 6 were filled with batch A and 6 filled with batch B. I then asked my wife to set up a random line of all 12 glasses. Taking my time and cleansing my palate with bread and water I went though each glass and took one to two sips to determine which beer it was. In the end I was able to separate them precisely based on both their hop taste and lingering bitterness. It shows that if I take my time I'm able to tell them apart reliably.

(2) 1 month after the initial taste
testing I brought samples to a club meeting and was surprised to see
that the difference, which was very clear to me earlier, has aged
away to some extend. Knowing what to look for I was still able to
taste a difference but at this point I would not be surprised if
others can't tell them apart.