Many articles about foam stability,
like this BYO article for example, mention that foaming during beer production can hurt the head
retention of beer. The explanation is that foaming consumes the
foaming compounds in the beer. I wanted to see if I can demonstrate
this with a simple experiment.

I took two 500 ml PET soda bottles and
filled each with about 300 ml of 1 C carbonated beer using a beer gun
like device. The beer was batch A from the Kraeusen Experiment. Both
bottles where then purged of air by squeezing and closing them once
all air was squeezed out. To fill the head space with CO2 and provide
the same storage conditions for both beers both bottles where shaken
up once. After that they were stored in a 8 C fridge. The control was
not shaken anymore but the “shaken” beer was shaken 3-4 times a
day over the next 3 days. Each time the foam was allowed to fall back
into the beer before it was shaken up again. Including the initial
shaking, which was also done for the control, the “shaken” beer
foamed up 10 times. This is 9 more than the control. 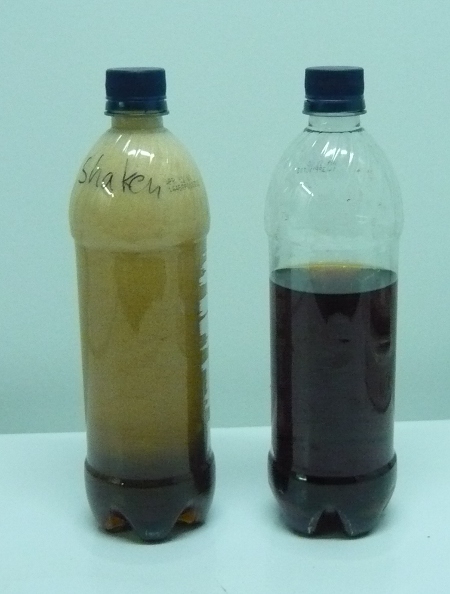 Shortly after shaking up the "shaken" sample.

Here are images I took while the foam
was collapsing.

Shortly after the glasses were filled. The two glasses on the left are the "shaken" beer and the 2 glasses on the right are the control. The order of filling them was 2, 3, 4, 1 with 1 being the left most sample and 4 the right most.

2 minutes into the experiment 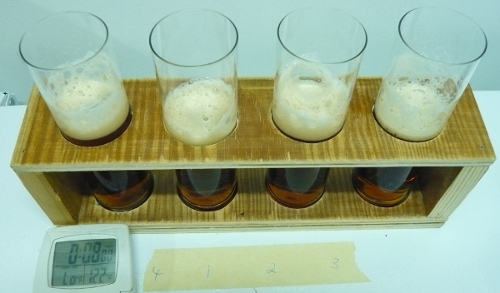 After 8 min. All samples appear to have the same amount of head left. The numbers in the lower section of the picture indicate the order in which the glasses were filled.

Looking onto the top of the beer. In all samples the surface of the beer starts to show.

After 9 minutes the foam in all samples receded to a point where beer is visible.

For both beers it took about 8-9 min
until some beer showed through the foam when looking into the glass
from the top. There was no significant difference in foam stability
between the two beers. The same was true for lacing. While this
method of evaluating foam stability is not as precise and repeatable
as the ones performed by beer analysis labs, it is good enough to
provide an objective assessment of the foam stability of a beer
using.

I'm not saying that foaming does not
affect foam stability at all but I was not able to demonstrate this
using this simple experiment. It is possible that other factors play
a role or that the effect is too small to be detected with such a
crude approach. But for now, I would not worry about heat retention
being reduced noticeably when the beer happens to foam during the
brewing process.