On my last batch I put my dissolved oxygen meter to good use and tested the effectiveness of an wort aeration device that some brewers use. This device is a pipe with several small holes. As the wort flows through the pipe it pulls in air through the holes (Venturi Effect). The air then mixes with the wort and oxygenates that wort.

Building this device is simple. I used a 12 inch copper pipe in which I drilled 20 small holes. The holes are clustered around the top. The pipe was sanitized in boiling water and attached to the end of the vinyl tubing used for racking the wort from the boil kettle to the carboy.

I noticed that when wort is flowing through the device air is not necessarily drawn in. If this is the case some movement or shaking of the pipe is necessary to start the inflow of air which is accompanied by an audible gurgling. I did not pay attention to that at the beginning and as a result about ¼ of the carboy were filled without the device actually pulling in air. 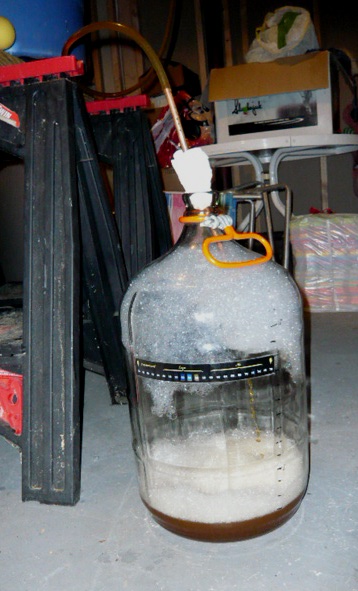 Another problem was the substantial development of foam which required 2 pauses in order for it to settle so filling could continue.

Once the 5 gallon (18.9 l) carboy was filled to the 16 l mark. I swirled the wort around in order to provide some mixing action.

The problem with this device is that the air bubbles it creates are not small enough for an effective O2 transfer between air and wort. While a lot of foam was created, this foam had much larger bubbles than the fine foam that is created by using a mix-stir or a sintered stone for aeration. Both these methods have shown better performance in wort aeration (not yet published data).

To test this aeration method further, a 1 qt Mason jar was filled with about 1 pint of wort through the perforated pipe. The resulting oxygen content was about 3.5 ppm. Closing the jar and vigorous shaking it for about 30 s boosted the wort oxygen content to 7.3 ppm which is close to oxygen saturation possible with air (about 8.0 ppm).

It should be noted that these are the results of one limited experiment and that they can not necessarily generalized to say that aeration with a perforated pipe always leads to inadequate wort oxygenation.