After about a week of being carbonated at room temperature and a few days in the fridge I tasted the beers fermented with different pitching rates. All beers carbonated well.

But first a few stats that I also collected: pH an foam stability. Below in bold:

Foam stability is where I pour the beer straight into a Koelsch glass until the foam reaches the top and then I measure the time it takes for the layer of bubbles to collapse, break and reveal the surface of the beer. These numbers are not very repeatable and can be very random. Everything above 7 min is pretty good. The test is designed to detect major deficiencies in foam stability. 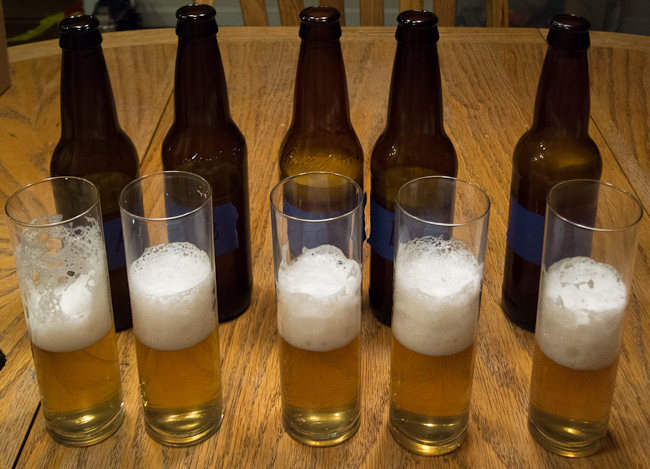 The 5 beers a few minutes into the foam stability test

The literature reports that ester production is connected with yeast growth and the more the yeast is able to grow the less it will produce esters since the ester precursor Acyl CoA is used for yeast growth. However, the amount of yeast sediment produced by each fermentation suggested that the most yeast growth happened for the beer with the highest pitching rate.

In the end, this is just another data point for the effects of pitching rate on fermentation performance and beer quality.