Zinc is an important co-factor in many enzymes and thus a requirement for yeast growth. Most yeast strains require 0.1 – 0.2 mg/l of zinc. Zinc levels greater than 0.6 mg/l can inhibit yeast growth (Priest, Handbook of Brewing).

Zinc may be the only yeast nutrient that even barley malt is deficient of. As a result fermentation performance may benefit from the addition of zinc. This is why I conducted this experiment.

In the end I was not able to find any significant difference between the control fermentation and the 4 different levels of zinc additions with the exception of yeast growth. The most yeast growth was observed for the fermentation that added 0.2 mg/l zinc. This would agree with the literature which mentions possible yeast growth inhibition at total zinc levels above 0.6 mg/l.

The absence of other differences may be because the wort (98% Pilsner malt wort) contained sufficient zinc for the yeast that was used (WLP 830) or that the yeast was not able to utilize the zinc that was added (in this case the yeast growth differences would have to be attributed to a random error). The zinc came from simple 50 mg zinc tablets that are available as dietary supplements in a grocery store.

Details of the experiment

Mashed with a Hochkurz mash

It was boiled and cooled before a stir plate and O2 were used to achieve a wort oxygen content of ~12 ppm. WLP 830 yeast was then added and allowed to un-flocculate completely before the pitching rate was determined with a hemocytometer. The pitching rate was about 9 Millon cells per ml.

About 413-125g of this pitched wort were poured into 5 500 ml Erlenmeyer flasks. In order to eliminate the effects of settling yeast during this process flasks were filled in random order and the cell density in the remaining wort was also determined. That cell density was around 10 M/ml. As a result there was no significant yeast settling that may have lead to different pitching rates. 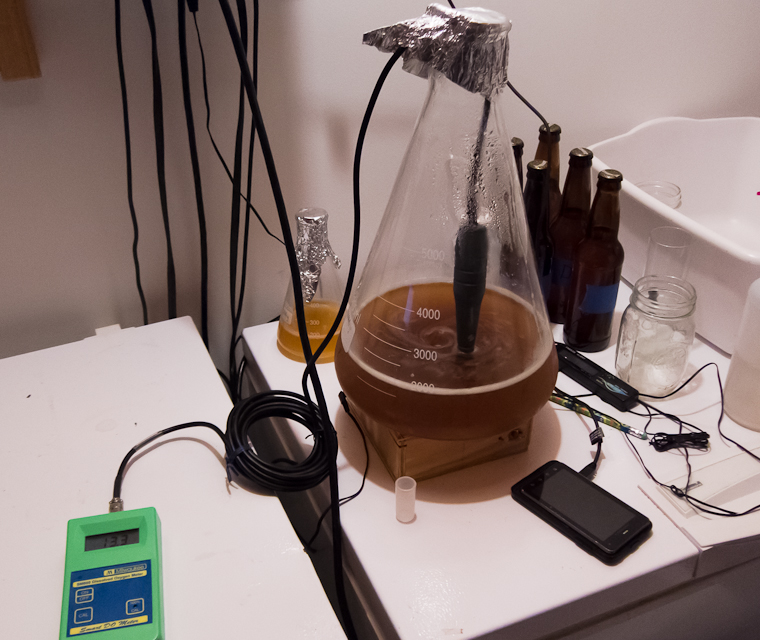 To provide varying levels of zinc additions a 50 mg zinc tablet was dissolved in 185 ml water resulting in a 0.27 mg/ml solution. 0, 0.3, 1, 4 and 8 ml of this solution were added to the 5 different fermentation resulting in 0.0, 0.2, 0.7, 2.6 and 5.1 mg/l of zinc addition, respectively. To keep the addition of water the same DI water was added such that the water addition was 8 ml for each fermentation. 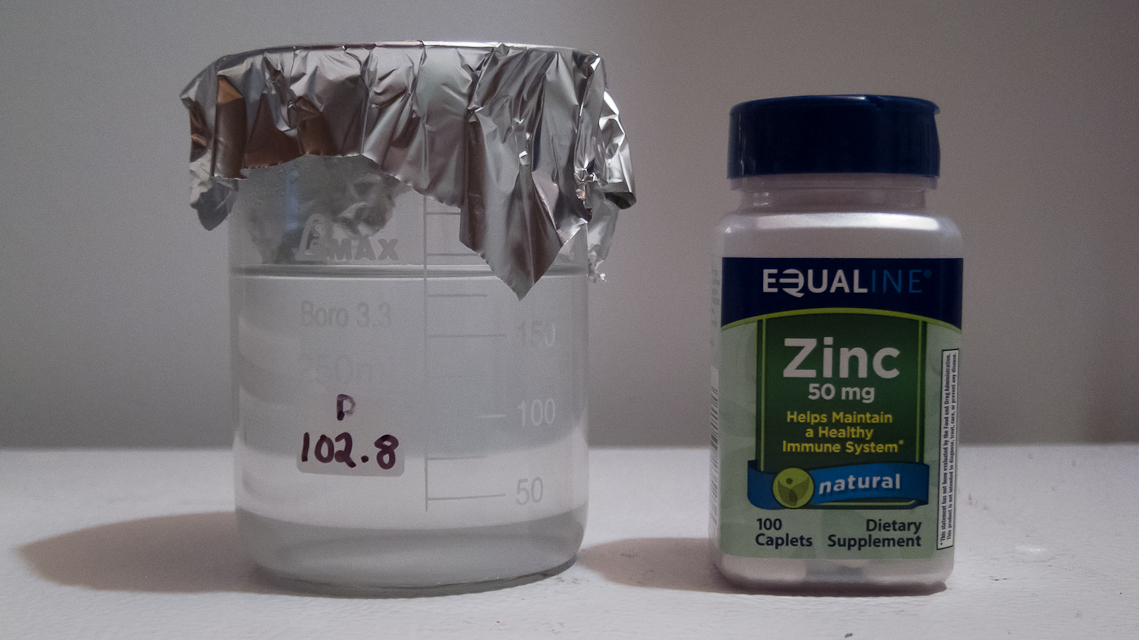 The flasks were sealed with an airlock and their initial weight was determined before they were placed into a temperature controlled freezer chest. The initial ambient temperature was 7.5 C and was later raised to 11.8 C. 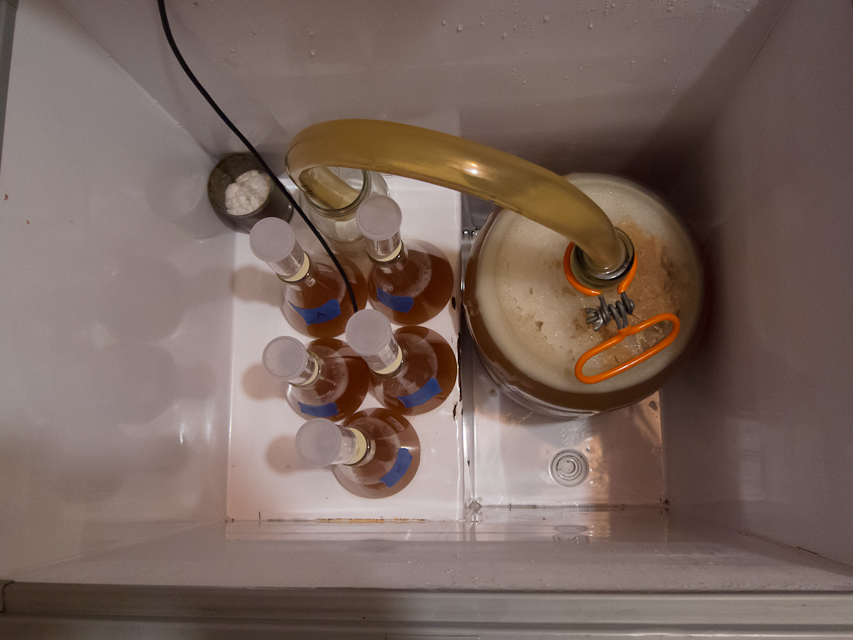 The flasks were weighed about twice per day for 15 days until the weight loss stabilized. At that point the extract content of the beer was determined with a precision 0.990 – 1.020 sg hydrometer before the beer was filled into a bottle along with 1.9 g of sugar and some of the yeast sediment.

The yeast sediment remaining in each flask after all beer was decanted was determined by weighing the flask and subtracting the empty weight of the flask.

About 1 oz of beer was left over which used to measure pH and these samples were also tasted.

These are the various metrics that were collected for all 5 fermentations:

And the fermentation profile: 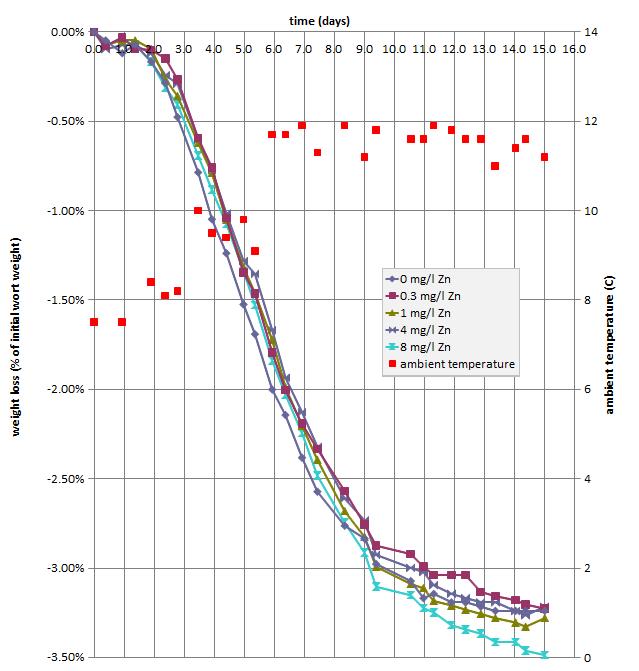 For some reason the “+8 mg/l Zn” fermentation showed a larger weight loss (measure of lost CO2) then the other fermentations, but that did not show up as higher attenuation or lower final extract. It is not known what could have caused this increased weight loss.

There were no taste differences that I detected between the beers. Tasting of samples was done after the measurements were taken and my taste perception could have been influenced by my expectation that there would be no difference. 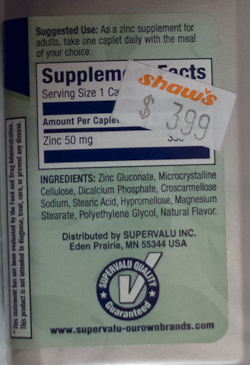 It is possible that the zinc had no effect and that the yeast sediment weight differences are the result of a random error. On the left is a picture of the ingredients label. Zinc is present in these caplets as Zinc Gluconate which may not readily release Zn2+ into the wort. The use of zinc chloride would have been more reliable, but I didn’t have that at hand. Maybe for a later experiment I get ZnCl2.

11 thoughts on “The effect of zinc on fermentation performance”