Many brewers scoff at the idea of using hop extract. After all, it represents what’s wrong with industrial brewing these days: finding ways to cut corners and save money. For these purists even pellet hops are too much processing and only whole flower hops should be used. In a hypocritical move, the same brewer may also be adding anti-foam or mash pH stabilizer during the brewing process.

Hop extract is a processed form of hops. The two types that are allowed in German brewing are CO2 and Ethanol extracts. Because they use fermentation CO2 or ethanol, respectively, they comply with the Reinheitsgebot (purity law). Due to the extraction of chlorophyll, Ethanol hop extracts have a green color. CO2 extracts, on the other hand, appear yellow and seem to be more commonly in use. Both types of extracts contain the hop’s resins and aromatic oils. 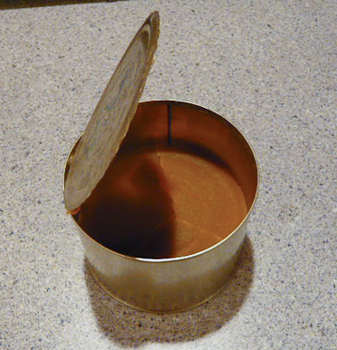 Hop extract in a can

One of the major benefit of hop extract to the home brewer (and commercial brewer) is the lack of vegetative matter. This means more alpha acids can be added to the boil without increasing hop trub. The other benefit of it is the reduction of polyphenols extracted from hop vegetative matter. According to Narziss/Back (German brewing authors) this leads to a cleaner bitterness. CO2 extracts don’t contain any hop polyhenols while Ethanol extracts contain some.

When using hop extract I squirt it onto a piece of aluminum foil while weighing it. The hop extract is then added to the wort at start of the boil. It slides right of the foil when held into hot wort. It has been my experience that the extract’s bittering “power” is not as much as pellet hops. That might be a result of the smoother bitterness or the fact that it doesn’t mix as well with the wort as pellet hops do.  After chilling I can see a lot of resin beads on the side of the kettle. Because of this I use bout 10-20% more alpha acid with hop extract than I would use with pellet hops. Your mileage may vary and you’ll have to experiment.

If you don’t want to buy a can of hop extract yourself, you can try Northern Brewer’s Hop Shot. They appear to be the only home brew store that sells hop extract. 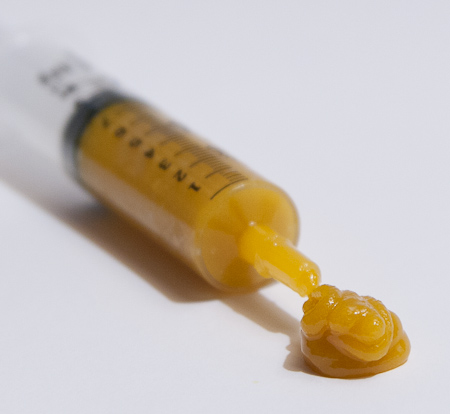