Last night I tasted a version bottled normally and one where I purged the head space with O2. The intend of the O2 in the head space was to see if it speeds up the aging process. Both beers were carbonated at bottling time and free of yeast. This tasting was 2 months after the beer was bottled and 6 1/2 moths after it was brewed. 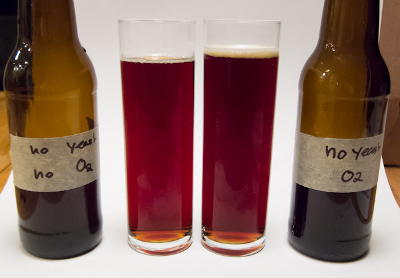 The oxygenated version had a darker color as can be seen on the image on the left hand side and below. This color in crease is a known effect of oxidation and I have also observed this when I oxygenated and force aged a Pilsner. The increased color in the picture was not just because the oxygenated beer had a closed foam cover. 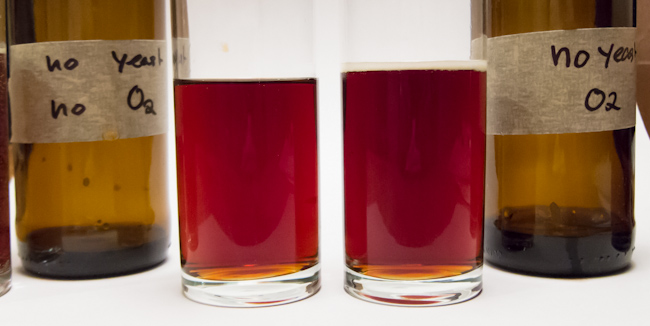 A better picture for comparing color.

But the biggest surprise was the incredibly poor head retention of the normal beer. It annoyed me during attempts to take a good picture for comparing color since the foam cover would quickly break open while it stayed close on the oxygenated beer. The shadow of the foam skews the color and darkness of the beer.

So I took another set of glasses and performed my standard foam stability test where I pour beer straight down the middle until foam reaches the top. I did this for both beers and waited for the foam to settle.

The non-oxygenated beer clearly showed very coarse foam that collapsed quickly. Generally it would take 7 – 10 min between pouring and opening of the foam cover to show beer surface. But for the non oxygen beer it took just about 2 minutes. That was very surprising and I have no explanation for that. An internet search for foam stability and oxidation did not reveal any useful leads. It is certainly possible that something else, other than oxidation, was to blame for the poor head retention. I do have another normal vs. oxygenated pair and plan to taste this in a few weeks along with a bottle to which I added yeast.

As for taste, the normal beer did have a slight “dark malt” aroma. It’s bitterness was rather sharp and lingered a bit. The oxygenated version had notes of black currant (common oxidation aroma) and a slightly more pronounced “dark malt” aroma. It did not taste like cardboard or sherry. It had more of the desirable Doppelbock character than the non oxygen version and I would consider it definitely the better beer of the two. It won in both, taste and appearance.

The stark difference in foam stability is interesting and will require attention in subsequent samplings of this beer. The accelerated aging of the oxygen beer was expected. I was just surprised that the beer did not taste oxidized given the fact that it was actually bottled with a head space full of O2. Dark beers are known to withstand oxygen better due to the antioxidative properties of melanoidins.

I took one of the non O2 beers and a carefully cleaned glass and repeated the foam stability test again. This time the foam did not fall that quickly, but it still showed unusually large bubbles. There is a good chance that the glass I used for the test was not clean enough and skewed the results. I’ll try this again when tasting the other bottle with added O2.

5 thoughts on “Better Foamstability Through Oxidation?”