This all started when I was preparing one of my presentations for ANHC-3 and I looked into the patent for Boston Beer Company’s Infinium and other patents for high attenuation beers. I found that an enzymatically active malt extract (basically wort with active b-amylase enzymes) can be added to the fermenter. I was skeptical about this approach since malt is full of beer spoilage organisms (which is why you should not handle or mill malt in your fermentation area) and brewers rely on boiling to kill these organisms. However, boiling would also denature all the enzymes. According to the patent I found holding the mash for 30 min at 60 C before pulling the enzyme extract should be enough to kill the microbes but preserve enough b-amylase to be a useful in the fermenter.

So when I had a low fermentability Weissbier I gave this a try in a small test fermentation. Here are the two blog posts on that topic

The result was that I did not spoil the beer and that the enzymes in wort don’t break down as much of the residual sugars, and possibly proteins, as Beano does. Based on these results I was planning to use this technique on a full 18 l batch.

Since I expected close to 100% apparent attenuation it had to be a big beer. High attenuation and thus lighter body works well with a Double IPA. In fact many brewers of good DIPAs use sugar as an adjunct to add alcohol without adding body. So I brewed a stronger version of my KaIPA using this recipe: KaIPA^2 on Brewer’s Friend. It uses lots of my homegrown Cascade hops and hop extract for the bulk of the bittering.

Key was an initial mash rest at 60 C for 30 min and then filtering some of that mash to collect about 500 ml enzymatically active wort. That wort was cooled immediately and used to wake up the yeast. Using it to wake up the yeast was not necessary but why not. That way the yeast could get a head start and I would not forget to add it later.

The fast ferment test for this beer also got some of the enzymatically active wort which is important to get an estimation of the actual attenuation limit of the beer. In this case the FFT stopped at -0.2 Plato which is an attenuation limit slightly above 100%.

To keep the production of higher alcohols in check I started the fermentation at 14 C (58 F) which is fairly low for the used yeast (WLP 001 – American Ale). After a few days I raised the temperature to 16 and then later to 20 C. The production of higher alcohols happens when the yeast consumes wort amino acids and that only happens during the growth phase which is generally over once high Kraeusen has been reached.

8 days after pitching the beer reached 5.0 Plato (down from 19.6 Plato). I let it go for another week in the primary fermenter before I transferred to a keg with some of the yeast. Later, after some more fermentation in the keg, I added gelatin and put the beer on tap. I was a bit lazy with taking more detailed notes.

I have been enjoying this beer for the last 2 weeks. The actual fermentation reached only 2.1Plato (an attenuation of almost 90%) which is higher than I expected based on the fast ferment test and the next time I’ll have to let the beer ferment longer. Unfortunately this IPA wants to be enjoyed young and 30 days after brewing the hop character is starting to fade. I still have the option of dry hopping in the keg which I may want to do. 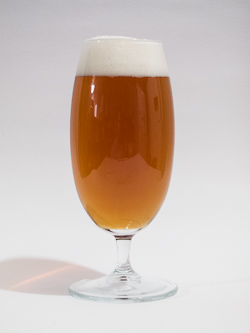 Because of its high attenuation the beer has the mount feel of a Pale Ale but the high alcohol is evident both in aroma and taste. The hop character is fading but I have not added any dry hops yet since I was hoping to be able to rely on the 30 min hop stand with about 40 g of whole flower cascade hops.

There are a number of things I want to improve in the future. On top of the list is to get the yeast to ferment closer to the attenuation limit. That probably means more yeast, possibly with some O2 during fermentation, and longer primary fermentation time. I think 95% attenuation is a reasonable target. To keep the current mouthfeel of the beer at 95% ADF I want to use a substantial portion of wheat or rye malt in the grist. Wheat malt would provide protein and rye malt would add b-glucans. Neither of these compounds will be attacked by the enzymes and should provide an upper limit for the attenuation.
Conclusion:

This experiment was a definite success. The beer is a high gravity beer that is very enjoyable. Any concerns I had about adding non boiled wort to the fermentation were not justified. I also did not produce the dreaded “rocket fuel” that many brewers seem to get when they use enzyme preparations like Beano. I encourage others to give this a try.  Maybe this will become an accepted method of brewing DIPAs that are extremely or even too drinkable for their alcohol content.