Tonight I was finally able to do cell counts on an experiment that I wanted to do for a while now: “How does the access to air affect yeast growth in starters”. The experiment compared stirred starters capped with airlock, aluminum foil, no cover and injected air.

The setup was very simple. 8.9 Plato wort was prepared using DME and water (no hops) and inoculated with a 2 day old culture of WY2042 (Danish Lager). The innoculation rate was 10.8 B/l or 0.12 B/g (billion cells per gram of extract). The inoculated wort was split between four 500 ml Erlenmeyer flasks. Each flask received about 275 g wort. 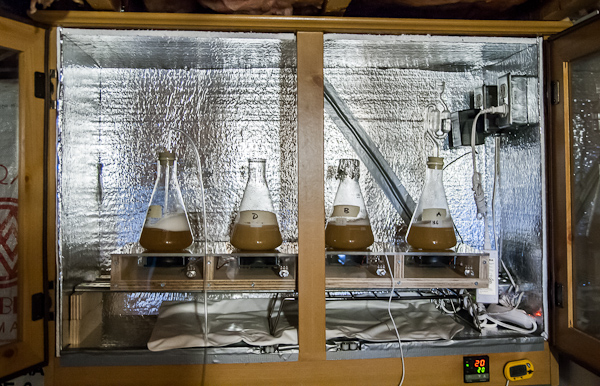 Setup for the yeast growth over “access tro air” experiment

The air injection was done with sterile air and the end of the glass tube was positioned about 5 mm over the wort surface. This was done to avoid foaming and allowed air to be absorbed through the vortex.

All starters were allowed to grow for 2 days. After that time no more CO2 escape was noticeable in the airlock covered starter.

The following chart shows the amount of growth as billion new cells per initial gram of extract that grew in each of the starters. The error bars are based on a counting error of 10% that was applied to both the initial and the final cell count. Given the small number of initial cells the error of the final cell count is dominant in this case.

specific growth for each of the starters

The stream of air injected into one of the starters was so intense that it actually caused significant evaporation. It lead to a weight loss of 20% compared to the 2.2-3.2% for the other starters. Final cell counts considered the actual final volume.

The increased yeast growth could be caused by 2 different mechanisms.

This experiment is not able to shed light onto this and more experimentation is needed. Since yeast are able to absorb sterols from the growth medium the addition of olive oil to stirred and airlock covered starters could show if sterol synthesis is a limiter to growth in starters.

The better access a starter has to fresh air the more yeast can be grown. More experimentation is needed to better understand the limiters to yeast growth in starters.

While a completely uncovered flask is not practical for yeast propagation in a brewery it was included to show how how much can can be gained by not restricting the gas exchange. For practical yeast propagation a more sanitary alternative would be necessary.