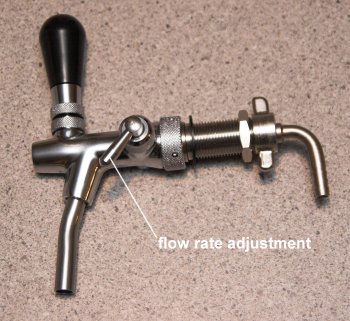 This done though a stainless steel cone that can be pushed into a cone shaped opening through a lever movable from the outside (Figure 2). The further this cone is pushed in, the narrower will be the gap that the beer has to flow through. As a result the higher the pressure drop will be over that distance. Because the pressure drop is not sudden but gradual over a longer distance the CO2 will not suddenly escape from the beer. After that pressure drop there is a valve that allows the beer to flow through the tap into the glass. But unfortunately a large pressure drop, as it is necessary for short beer lines found in a Keg-o-rator require a fairly strong restriction of the flow rate which results in a slower overall beer flow rate. Nonetheless the adjustable flow rate also allows for serving beer at different pressures without having to design the draft system for a compromise between different serving pressures.

Another interesting feature is the "Schaumtaste" (foam button). It is not actually a button on the tap by a feature that is activated when the tap handle is presses backward. In that position the beer is forced though a small opening which causes it to foam up and the foam is directed into the glass. While this feature is definitely not a necessity and a good Wirt (host) should be able to produce a nice head on a beer without this feature it is definitely a nifty invention. Compared tho the foam that is produced while dispensing beer in the normal mode, this foam is much creamier and comprised of much smaller bubbles.

These taps are widely used in Germany but largely unknown in America. So far I have found 2 places in the US that sell these:

Figure 4 - The parts of the tap. Note the restrictor cone which fits inside a cone shaped space inside the shank to its right. The adjustment knob is shown below and it has a nob that fits into the circular depression of the restrictor cone. This allows the cone to me moved forward and back which controls the opening that the beer can flow though
Retrieved from "http://braukaiser.com/wiki/index.php?title=Kompensatorzapfhahn&oldid=3583"