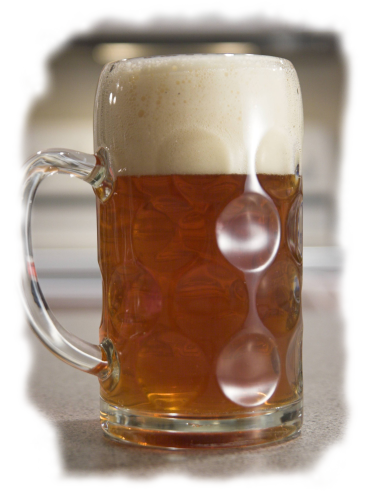 This is what I would consider a classic Maibock example. Contrary to popular belief, a Maibock is not a Helles brewed to Bock strength (by German law Bock means an original extract of more than 16 Plato) but more a modern Oktoberfest beer brewed to Bock strength, since it is not brewed from 100% Pilsner malt like a classic Helles is. This beer benefits from a fairly long lagering process (about 3 months) and should therefore be brewed in late December or early January to be ready to be tapped in Mai. Preferably while raising a Maibaum. This Maibock targets an original extract amount of 16.5 Plato. which is where most of the German Maibocks are. Like almost any other German beer, you want this to be drinkable by the Mass (1L Glasses).

20% Weyermann Munich Type II (this is the dark Munich. When using light Munich use 40% and 20% less Pilsner malt)

2.5% Weyermann CaraVienna (I used this because I had it, you can also use 5% CaraHell or CaraFoam)

2% Weyermann Acidulated Malt (if you don't want to use this, substitute with Pilsner and aim for a residual Alkalinity of 30 mg/l HCO3)

The strike water volume is 18L, which results in a mash thickness of 3.2 l/kg

Based on your previous efficiencies calculate the grain amounts to get a post boil gravity of 16.5 *P (1.066 SG)

The hop amounts are for a 20.5 L post boil volume:

I used about 200ml sediment from a previous batch for a batch size of 17L.

If you don't have that yeast, you may use any other well flocculating lager yeast.

This Maibock was actually part of a decoction experiment. Since I wasn't able to detect any sigificant difference you have your choice of mashing shedules to move between the rests:

Calculate the water additions to reach a final mash thickness of ~ 3.2 - 3.5 l/kg

Add hops after 10 min boil and boil for another 60 min. I used an immersion chiller to chill quickly. If you generally have DMS problems with a less then 90min boil and a Pilsner malt grist, boil for 90 min. Chill to pitching temperature of 6-7 *C (43 - 45 *F).

This is key: Keep the primary fermentation temp below or at 9 C for 2 weeks or until the fermentation activity has subsided significantly. In high gravity beers like Bocks yeast has a tendency to develop an elavated level of fusel alcohols. This will lead to an alcohol taste of the beer, but you don't want that. The less you are able to taste the alcohol the better.

I also strongly recommend the Fast Ferment Test for that beer as it will tell you the limit of attenuation. You want the actual attenuation to be 4-6% below the limit of attenuation. If the fast ferment test finishes at 3.0 Plato, the beer should ideally finish at 3.6 Plato. But if the yeast stalls earlier, you will have to live with that. Hopefully the beer is not to sweet. You may raise the temp or add fresh yeast (in the form of Kraeusen if possible).

In my case the FFT finished at 3.0 Plato and the beer finished at 4.1 Plato. This is a difference of 7% and I think the beer has a touch to much sweetness. Next time I'll be working better to get the yeast to go further.

Once the beer is close (within 0.1 or 0.2 Plato) or at the desired final gravity, crash it to lagering temps (0-3 C) and lager for about 3 month or more. Then rack it off the sediment and serve.