This may sound crazy, but I commonly hold the “Diacetyl rest” at 22 C (72 F) for my lagers. When reading through some German brewing papers I notices that some of them referred to a fermentation schedule where the lager was fermented at 8 C (46 F) for about a week and after that the beer temperature was raised to 22 C for 1-2 days before the beer was crash cooled to near freezing for cold conditioning.

In my brewing it takes a bit longer than a week for the beer to be done with primary fermentation. It also doesn’t reach final gravity as fast as it was shown in those papers. To make maters worse, fermenting the last few fermentable sugars until the attenuation is close enough to the attenuation limit always tends to take longer than I want it to.

To speed things up I started holding the “Diacetyl rest” rest around 20 C. I intentionally put diacetyl rest in quotes since for most of us the primary benefit of this rest is not diacetyl reduction but speeding up yeast’s consumption of those last fermentable sugars.I prefer to call this rest a maturation rest and may hold it for up to a week, if the beer is still too far away from its attenuation target. (If you don’t know how to determine final extract or gravity target of the beer, check out the Fast Ferment Test.) 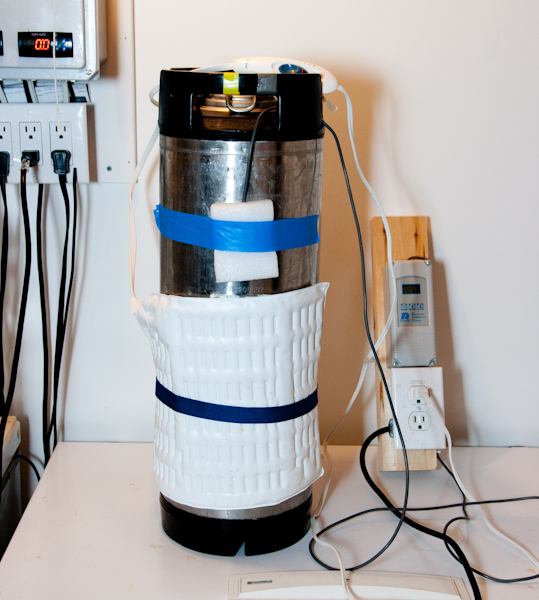 I do these maturation rests in kegs for a number of reasons. First, I can easily heat them with a heating pad controlled by a temperature controller. Second, I can use this fermentation to carbonate the beer. Lastly, the yeast will consume all the oxygen that is introduced during racking.

The image above shows how the heating pad (you’ll need one that doesn’t have an automatic shut-off) is attached to the bottom of the keg. At the top of the keg I attach the temperature sensor, covered with a piece of foam.

When the beer is racked to the keg, I make sure plenty of yeast is transferred as well. The kegs have a shortened dip tube, which allows for transferring the beer and leaving behind the yeast sediment later.

Finally the whole thing is wrapped in a blanket for further insulation: 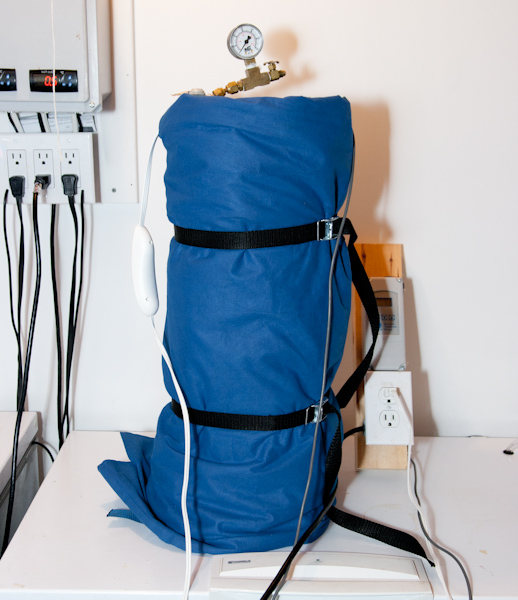 Keg wrapped in a blanket

A pressure gauge is attached to monitor the pressure build-up and allow controlled CO2 release.