You may remember the recent post about the Infinium’s patent pending brewing process and its mention of enzyme extracts in the fermenter. I recently brewed a Hopfen Weisse inspired Weissbier IPA where the wort fermentability was unexpectedly high. I decided that this was an opportunity to test the use of enzymes in the fermenter. So I took about 1800 ml of the young beer after primary fermentation and split it into three 600 ml batches. One became the control, one received an enzymatic malt extract and the last one got some Beano. I heard that Beano has the tendency to create “rocket-fuel” and I wanted to test this. 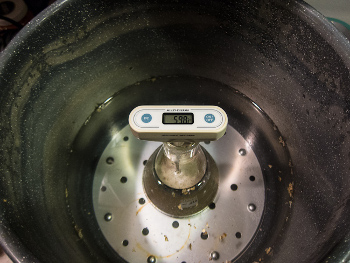 The instructions for the enzymatic malt extract came from this patent for low calorie beer where an enzymatic malt extract is prepared using a 30 min mash at 60 C. This kills most of the bacteria but keeps enough b-amylase active to be useful in the fermenter. Killing bacteria is important since the extract will be added directly to the fermenter without any boiling. I was curious if this really works since spent grain, which is raised to even higher temperatures for longer times during mashing, seems to be loaded with microbes. A fact for which I get a pungent reminder when I open a mash tun I forgot to clean on brew day.

The mash consisted of 70 g milled Pilsner malt and 360 ml reverse osmosis water. I was not too concerned about getting the correct mash pH. After all, I only needed enzyme extraction  and  some level of pasteurization. Set in a water bath I was able to hold a steady temp of ~60 C for 30 min. Temperature control of small volumes is challenging. A well insulated and pre-heated thermos may work too. 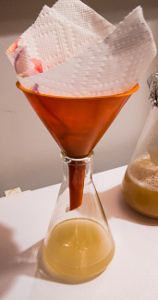 The malt extract was filtered through a paper towel set into a funnel. Its extract content ended up being 10 Plato. This amounts to 75 % conversion efficiency. Not that this efficiency matters much, but I took the extract content of the malt extract into account when calculating the corrected starting extract for the beer. 53 ml of this malt extract was added to the 600 ml beer. About 8% of its volume. There was no science behind this ratio. Too much and I would dilute the beer too much and too little I would not add enough enzymes.

The Beano I used came in pill form and I dissolved one pill in 100 ml water. Beano’s strength is measured in GAU (GlucoAmylase Units). One Glucoamylase Unit (GAU) is the amount of enzyme activity that will liberate on (1) gram of reducing sugar as D-glucose per hour under the conditions of the GA Assay (Vri 511.002). (source http://vitallifeproducts.com). 22 ml of this solution went into one of the beer samples which added about 110 GAU per liter beer.

20 ml water were added to the control to lower its original extract since the other 2 experiments also lowered the starting extract of the beer. 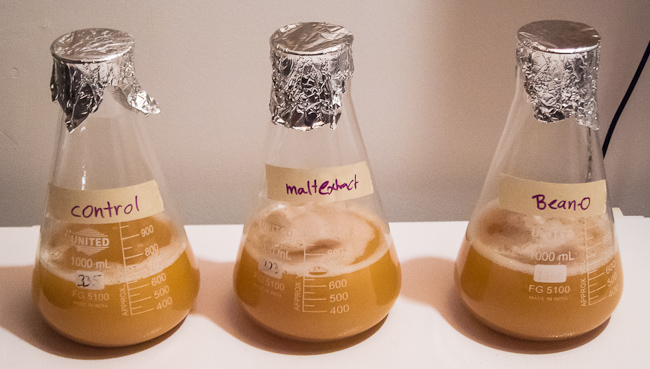 The 3 fermentations immediately after being prepared 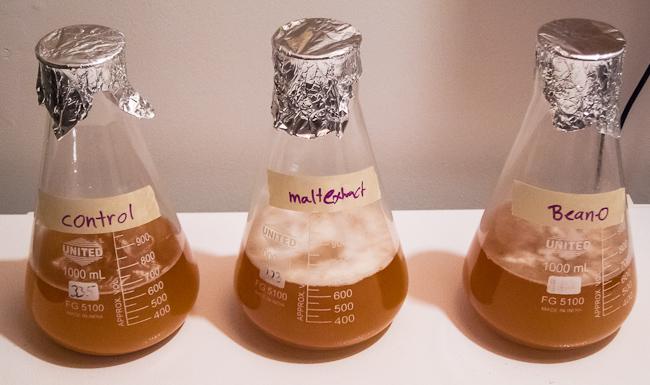 10 hours later, the malt extract fermentation shows the most activity

After 9 days I concluded that all fermentations were done and I bottled the beers.

To carbonate the beer I added 4.3 g dissolved table sugar to each 500 ml bottle and some yeast.

I also got an opportunity to measure the current extract and pH. Most importantly I was able to taste uncarbonated samples. Here are the stats:

As expected the addition of enzymes boosted attenuation. Beano seems to digest more dextins than a malt extract. I wonder to what extent the difference is caused by limit dextrins (1-6 glucose links), which can only be broken by limit dextrinase, an enzyme which likely did not survive the 30 min mash at 60 C. Beano’s glucoamylase is likely able to cleave both the 1-4 and the 1-6 links found in starch leaving only glucose and no limit dextrins.

It was surprising, however, that even with enzyme use during fermentation the apparent attenuation stayed in the mid 80’s. This suggests that the low wort fermentability may not have been the result of incomplete starch and dextrin break-down during the mash. After all, I was going for very fermentable wort and held 30 min rests at 55 C, 63 C and 65 C followed by a 45 min rest at 72 C. I was expecting to get an attenuation limit in the high 80’s with this mash schedule.

There was also a drop in pH. I contribute this to the extended fermentation activity, which was longer for Beano compared to the malt extract.

So much for the metrics, here are some brief tasting notes:

control: No noticeable off flavors. While this was a Weissbier yeast, it is a yeast that produces only limited amounts of phenolics. The mouthfeel is rather thick and the beer does not have the refreshing IPA character that I was going for

enzymatic malt extract: No off flavors. Whatever surviving microbes came in from the malt did not take hold and spoil the beer. I’ll have to see how this develops as the beer sits in the bottle for a month. The mouthfeel was much lighter and more  easy drinking than the control. This was the taste I was shooting for.

Beano: No off flavors either. The mouthfeel was even lighter than the malt extract version. But it was not the dreaded “rocket fuel” that others have gotten from Beano before. I think this version felt a bit too thin in its taste, though. I’ll have to defer to tasting a carbonated sample.

I think enzymatic malt extract in the fermenter works. It appears to be a viable option for creating highly attenuated high alcohol beers and I plan on using it on a full size batch in the future. I don’t know if it is a practical option for fixing low wort fermebtability in lower gravity beers since they may become too thin. After all, the enzymatic reactions will continue until all substrate, i.e. dextrines,  is gone.

8 thoughts on “Enzymes in the fermenter”