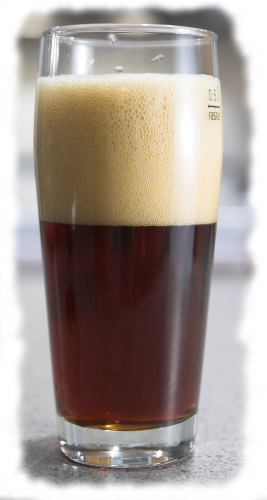 The Imperator Doppelbock is a classic German Doppelbock that is comparable to Spaten's Optimator without trying to be a clone. It is of a dark mahagony color without roasted notes in aroma or taste. Though intended to be complex in flavor it is also very drinkable. Mostly due to its starting extract of 18.5 Plato which puts it in the lower end of the range for Doppelbocks. But most commercial examples are fairly close to that range. This beer will take some time. After lagering it for 2-3 months, it should be aged for at least another 2-3 months for the dark fruit notes to come out.

The traditional season for Doppelbock is Lent, which is the time from Ashwednesday to Good Friday. Ashwednesday is generally towards the end of February. This means that the best time to brew this beer is September. Which will give it 6 month to be ready for its season.

This water treatment is for 34.5 l reverse osmosis water:

While it is not important to match this water profile exactly, the following guidelines should be followed:

The Pilsner malt (can be substituted with regular German Pils malt) was added as an insurance against excessive enzyme degradation during the decoction process. I had troubles with 100% dark munich malt decoction mashes before. The CaraAroma could be omitted if not available. To increase the complexity of this beer, I like to layer different crystal malts. In this case Weyermann's CaraMunich II and III.

Use your batch size and brewhouse efficiency to determine the grain amounts necessary to reach a post boil gravity of 18.5 Plato (~1.074 SG)

for a 22l batch add about 2.4g of alpha acid (24g of hops with 10% AA or 48g of hops with 5% AA. You get the idea) 5-10 min after the start of the boil and boil for another 60 min. German Hallertauer Mittelfrueh or even Hallertauer Magnum will work well. The Tinseth formula estimated 22 IBU for this beer.

WY2206 (Bavarian Lager) works well for this beer. For 19l (5 gal) pitch about 200 ml thick fresh yeast slurry. This slurry can come from a previous batch or a starter. Make sure it is fresh since a lot of yeast is needed to fully ferment this beer.

Various mash options exist for this beer, but I prefer the enhanced double decoction. This mash provides a nice compromise between eliminated protein rest and boiling a large amount of the grain:

Cool the wort to 5-8 C and pitch the yeast after oxygenating the wort. You may give the beer another shot of oxygen after 10 - 12hrs if no activity is visible yet. Ferment at 8-9 C (46 - 48F ) for 4 weeks or until the attenuation is within 6-8% of the limit of attenuation (Fast Ferment Test). A fermentation below 10 C (50 F) is important to curb the production of fusel alcohols. Yeasts are more prone to the development of higher alcohols in high gravity wort environments. A warm diacetyl rest should not be necessary, but if the yeast shows very slow fermentation performance, raising the beer temperature after 60% attenuation can speed it up.

If natural carbonation is desired, the beer can already be racked to the secondary keg once it's attenuation is 11-14% below the limit of attenuation. Make sure to get some yeast into the keg as well if the beer already appears fairly clear. Let the beer reach the targeted attenuation in the keg and blow off excess pressure. Given the lower amount of yeast available, this process may have to be done above the primary fermentation temperature.

Once the primary fermentation and maturation is complete, rack the beer to a lagering vessel (other carboy or soda keg) and lager at 0-2 C (32 - 36F) for 2-3 months. The is no need to ramp down its temperature slowly because the targeted final attenuation is reached and the yeast has done it job. The lagering process will clear the beer and start mellowing out some of the harsh flavors. You may see another drop of the extract as there will be some yeast still active, but it should not be significant.

After lagering rack the beer to a serving keg or bottle and age at cellar temperatures ( 10 C / 50 F) for another 2-3 months. During that time most of the dark fruit notes will be formed by reactions between the alcohols (especially the higher alcohols) and acids in the beer. Some oxidation processes contribute to that as well. Since it is a chemical process, it works better at higher temperatures. Hence the suggestion to lager only for 2-3 months and then take it off the yeast completely and age for another 2-3 months. When I brewed this beer last, I happened to bottle some of it from the lagering keg. These bottles were stored at 10C (50F) and developed the dark fruit notes quicker than the beer that was still kept at lagering temps. Lagering should still be done in order to precipitate haze and yeast.