The Theory of Mashing

This article has largely been replaced by The Science of Mashing

Mashing is the process in which the milled grain is mixed with water. This activates enzymes that were already present in the barley seed or have been formed during the malting process. These enzymes work best in particular temperature and pH ranges. By varying the temperature of the mash, the brewer has control over the enzyme activity. In essence, mashing needs to been seen as an extension of the malting process. The following sections describe the enzymes that are more or less important for the mashing process. 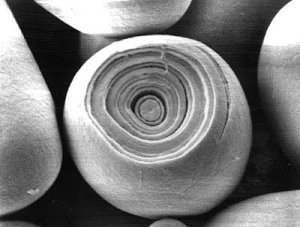 crossection of a starch kernel under an electron microscope [foodnews.ch]

Starch conversion is the most important aspect of mashing. In barley starch makes up 63% - 65% of the dry weight. Starch is a polysaccarid (very large chains of glucose) which is insoluble in water. Brewer's yeast, however, can only ferment monosacharides (glucose, ???), disacharides (maltose, ???) and trisacharides (matotriose, ???). The latter can only be completely fermented by lager yeast strains (s. uvarum).

In order for that starch to be converted into water soluble sugars (fermentable and unfermentable), two processes need to happen. First the starch is gelatenized to become water soluble. For starch found in barley and malt this happens above 140ºF (60ºC). Other starches (rice for example) gelatinizes only above 194ºF (90ºC) and requires boiling (see cereal mash) before it can be converted by enzymes. Secondly the activity of the amylase enzymes break the long chained starch molecules into shorter chains.

Beta amylase produces Maltose, the main wort sugar, by splitting 2 glucose molecules from the non-reducing end of a glucose chain. It is therefore able to completely convert Amylose. But since it cannot get past the branch joins, Amylopectin cannot completely be converted by beta amylase. The optimal pH range for beta amylase between 5.4 and 5.6 and the optimal temperature range is between 140ºF (60ºC) and 150ºF (65ºC). Above 160ºF (70ºC) beta amylase is quickly deactivated [Narziss, 2005].

Alpha Amylase is able to split 1-4 links within glucose chains. By doing so, it exposes additional non-reducing ends for the beta amylase. This allows for the further conversion of Amylopectin. The optimal pH range is between 5.6 and 5.8 and the optimal temperature range is between 162ºF (72ºC) and 167ºF (75ºC). Above 176ºF (80ºC) alpha amylase is quickly deactivated [Narziss, 2005]

Limit dextrinase is able to split the 1-6 links that are found in Amylopectin. It is therefore able to reduce the amount of limit dextrins (glucose chains containing a 1-6 link) which are left over by alpha and beta amylase activity. Its optimal pH is 5.1 and the otimal temperature range is between 133ºF (55ºC) and 140ºF (60ºC). Above 149ºF (65ºC) this enzyme is quickly deactivated [Narziss 2005]. Because of an optimal temperature well below the commonly used saccrification rest temperature for single temperature saccrification rests, this enzyme plays only a mior role in most mashing schedules. Extended rests in the lower and upper 130sºF (upper 50sºC) benefit a higer fermentability of the wort.

During mashing the starch conversion to fermentable and unfermentable sugars is mostly done though beta and alpha amylase activities.

While temperature has the biggest impact, the following factors also determine the achieved fermentability:

German brewers commonly apply a multi step saccharification rest to achieve better fermentability. As noted above, the genatinization of barley starch happens between 140ºF (60ºC) and 150ºF (65ºC) [Palmer, 2006]. This means that at the optimal temperature for beta-amylase not not all starch may have gelatinized and is accessible to the enzymes. A multi step saccrification rest would employ a first rest between 140ºF (60ºC) and 150ºF (65ºC) which gives the beta amylase plenty of time to produce maltose from the accessible starches. Due to the limit dextrinase and already existing alpha amylase activity, the 1-6 links of amylopectin don't pose a limit for the beta amylase. This rest is commonly known as maltase rest. The lower the temperature of this rest, the longer the beta amylase will last and the more maltose is produced which increases the fermentability. Since the mash is generally not completely converted after the 30-60 min maltose rest, a second conversion rest, called saccharification or dextrinization rest is employed. This rest is held between 160ºF (70ºC) and 164ºF (72ºC) which is well above the gelatinization temperatuere for barley starch and within the optimal temperature range for alpha Amylase which will quickly convert the remaining starches. This rest is usually held until conversion of the mash is complete. An other benefit of this rest is the formation of foam positive glyco proteins [Fix, 1999][Narziss, 2005]

If even better fermentability is desired, multiple rests within the beta and alpha amylase temperature range are possible. Such a mash schedule is used by Anheuser Bush to brew Bud Light without the use of enzyme additions in the mash. In order to leave as little dextrines as possible, their saccharification "rest" takes 2 hours while they slowly step the mash from 140ºF (60ºC) to 160ºF (70ºC) [source ??]. Such a mash schedule could be used by home brewers to brew highly attenuated styles like Belgian Saisons.

While the targets for the saccharification temperature are well understood, the targets for mash pH are not so consistent among different authors. This may be a result of the fact that the enzymes work well enough in a fairly wide pH range and that the effect of the mash pH on the beer is not as dramatic as the effect of the saccharification rest temperature (especially for single temperature saccharification rests). But the pH of the mash has not only an affect on the enzymatic activity, it also determines the boil pH, which affects the bitterness extraction and quality as well as the cooled wort pH which affects the fermentation performance.

The fairly wide range of suggested mash pH values suggests that there is not one optimal pH, but that the desired pH depends on the particular qualities (color, bitterness level, bitterness quality, protein coagulation, beer pH ....) that are targeted and that it provides yet another parameter that should be explored when perfecting a particular recipe.

The goal of malting and mashing is not the complete conversion of the malt's protein content, but the creation of a balanced mix of short (amino acids) and medium chained proteins. These become water soluble and, because they don't coagulate during the boil, will be carried over into the cast-out wort (the wort that is later fermented to beer). Amino acids are a necessary yeast nutrient and low FAN (free amino nitrogen) levels can lead to sluggish and unhealthy fermentations. Medium chained proteins are important for the perception of body in the beer as well as the foam stability.

In contrast to the starch conversion there is no simple set of enzymes or substrate that needs to be converted. Generally, when a protein rest is held in a mash, it is held between 122ºF (50ºC) and 133ºF (55ºC) where protoelytic activity shows a maximum. But even at higher temperatures, and in the starch conversion range is significant protein conversion happening [Narziss, 2005].

Rest temperatures closer to 155ºF (55ºC) emphasize the formation of medium chained proteins. Such a rest is better suited for most modern European lager malts. A dough at this temperature also benefits the fermentability if the mash lacks enzymatic strength.

Because of the protective effect of a ticker mash on the protoelytic enzymes, a protein rest benefits from a thicker mash. This works out well for step mash schedules where the temperature increase is achieved by hot water infuions.

Overmodified malts (like English or American Pale malts) do not require a protein rest. Since the protein conversion has been driven to a fairly advanced point during the malting process a protein rest may actually hurt by depleting the head and body positive medium chained proteins. For such malts a dough-in above the protein rest range or a simple single infusion mash is best.

Maltase converts maltose into glucose. It is therefore an important enzyme for the yeast. But it is also present in malt. But since its temperature optimum is between 95ºF (35ºC) and 104ºF (40ºC) [Narziss, 2005] and it is being deactivated above 115ºF (45ºC), this enzyme does not play any significant role in most mashing schedules since higher temperature rests are necessary to genate glucose for this enzyme.

It is however used in a masching schedule developed by Markus Hermann from the Weihenstephan brewing school in Germany. This mash converts half the mash to get a large amount of glucose. After that conversion is complete, it is mixed with the remaining mash to achieve a rest temperature of 95ºF (35ºF) where the maltase converts the now existing maltose to glucose. After that the whole mash is again run through a regular mashing schedule to convert the remaining starch to matose and dextrins. The result is a wort with a very high glucose content (about 40% of the fermentable sugars). Yeast fermenting such a wort will generate more esters, a property that can be used to produce German wheat beers with a high ester content.