Growing Yeast from a Plate

Growing yeast from a plate (petri dish) allows the brewer to select only a few single cell growth colonies. By doing so a pure culture can be obtained even if the starting culture was questionable. But because the number of yeast cells is very small during the first few steps, a sterile environment is necessary.

The same procedure can also be used to propagate yeast stored on a slant. Instead of picking a colony from a plate, simply scoop up some yeast from the slant and use that to inoculate the 1st stage starter volume. 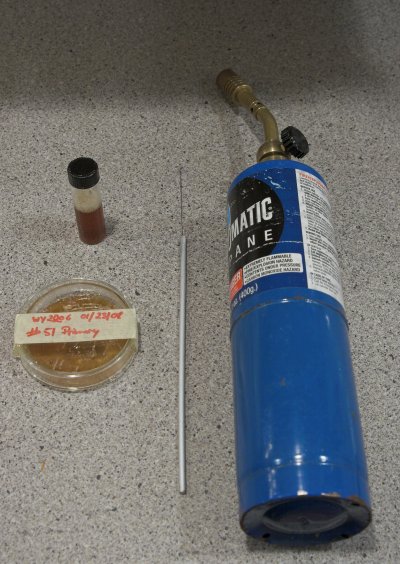 Make sure that there is no daft or other air movement in your working area. This could blow contaminants into your cultures. Loosen the cap of the vial or tube containing the 1st stage starter wort. This should pull in some air. Tighten the cap again and give it a shake to dissolve some of the oxygen. Since sterility is most important at this stage do not oxygenate the wort with other means that could spoil it. The yeast will grow even without lots of O2.

Undo the tape that keeps the petri dish closed, but keep the lid on.

Using the flame source sterilize the inoculation loop by starting from its end and pulling it slowly through the flame. All parts of the loop that may come in contact with the vial, wort or culture should have been glowing red. After that open the vial and stick the loop into the wort to cool it off. Otherwise you are going to fry the colonies that you are going to pick next. 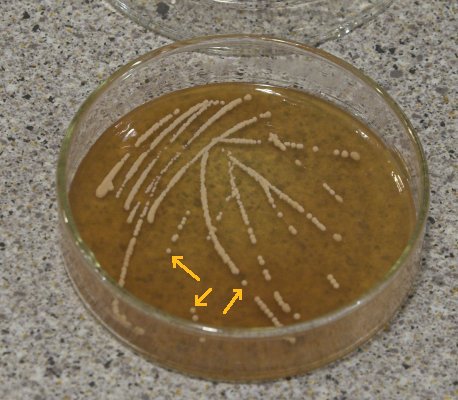 In order to ensure that you are only using yeast colonies that have grown from a single yeast cell only consider single round colonies of yeast. Yeas colonies are off-white with dull looking surface. Some of your streaks on the plate should have produced such colonies.

You can also grow yeast from a slant. But since there are no distinct colonies on a slant you simply pick up some of the yeast "lawn" with an inoculation loop and transfer that into the 1st step medium. The rest of the propagation process is identical. This saves the step of streaking yeast on a plate when I can trust the purity and viability of the culture on the slant. 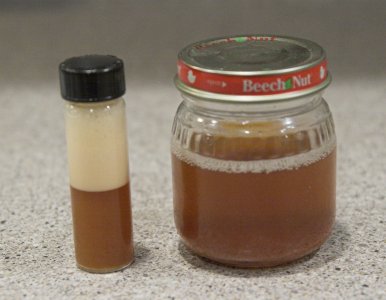 Once there is some yeast sediment in the vial and the sample looks cloudy when shaken up, it's time to step it up again. For the 2nd stage I'm still using sterile wort. But this time a larger amount that has been canned in a baby food jar. Crack the seal and let some air in. Close it again and shake it up to dissolve some oxygen. Also shake up the vial, open it and flame its opening before dumping it into the 2nd stage wort. Let this ferment for another 2 days at a warm spot. 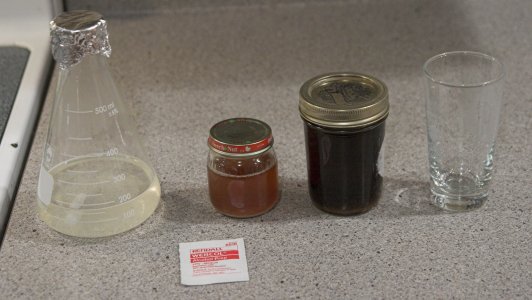 Once the 2nd stage shows a kraeusen and an increased amount of sediment it's time to move onto ~400 ml (12 oz) of starter size. To prepare this stage I add some water, stir bar and a pinch of yeast nutrient to a 500 ml Erlenmeyer flask. Cap with aluminum foil and boil on the stove. After 10 min of boiling I let it cool down and add canned wort. You want the final wort gravity to be between 8 and 10 *P (1.032 and 1.040 SG). At this gravity the yeast will have enough fermentables while not being stressed.

Since the yeast population is large enough to fend off small contaminations, it is now safe to oxygenate the wort with an oxygen system.

To pitch the yeast into the starter, open the 2nd stage vessel, wipe down its rim with an alcohol wipe and pour a sip into a glass. Close the 2nd stage vessel again and sample the bit you put into the glass. If it doesn't taste nasty and/or overly sour your yeast culture is still pure and you are fine to keep propagating it. Rouse the sediment and pour the rest into the Erlenmeyer flask and cap with aluminum foil.

Once the 400ml starter is sufficiently cloudy it can be pitched into 1600ml starter to make 2l. Aerate well and put it back on the stir plate and aerate occasionally. With a starter of that size, the stir plate doesn't do a very good job of aerating it. After a few days (faster when done at room temperature) it will be done fermenting. Now let the yeast settle out and decant the starter beer. If more yeast is desired add fresh wort, aerate and continue stirring.

Here are some examples of yeast propagation that I have experienced