I finally got around to taste 4 bottles of my last Doppeblock that were treated differently with respect to yeast and oxygen. All 4 were bottled on 8/18/12 straight from cold conditioning (which lasted about 2 month) using a picnic tap and short racking cane. At the time of tasting they had been in the bottle for 4 month and 2 weeks.

The bottles received this treatment:

I did a tasting between  “no yeast/no O2”  and  “no yeast/O2” bottles 2 months ago. The results can be found here: Better Foam Stability Through Oxydation?. During that tasting I observed a distinct difference in foam stability that many readers contributed to a poorly cleaned glass. This time I made sure that the glasses were perfectly clean. That meant soaking in diluted vinegar to remove lime stains, washing with dish sop and a RO water rinse. 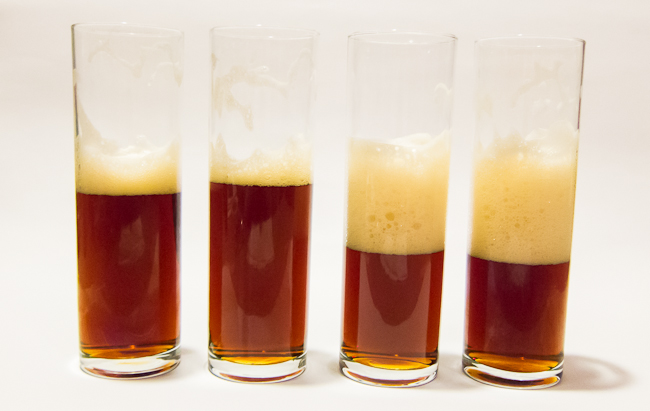 Here are my tasting notes. When I refer to “dark beer aroma/taste” I mean the type of aroma/taste one gets from a good Doppelbock. Think of dried fruit mixed with black currant. I’m also listing pH, refractometer reading in Brix (I didn’t feel like taking hydrometer readings and the foam stability number* )

After this tasting I did a blind tasting where I poured 2 glasses of each beer, scrambled the total of 8 glasses and attempted to match them to their respective beers. This is the groups I ended up with

This experiment solidifies the theory that the presence of yeast slows the development of the typical Doppelbock flavor. It does not show that the addition of oxygen, which is presumed to be the cause of this flavor, enhances this flavor of the beer after 4.5 months of aging. After 2 months of aging there appeared to be a more noticeable difference  (see  Better Foam Stability Through Oxydation?) At 4 months the addition of Oxygen did not make as much of a difference as the presence of yeast. This became apparent in the blind tasting where I could not keep the O2/no O2 versions apart but was able to identify the yeast/no yeast versions.

In future batches I do want to expand this experiment to developing a time line that shows when the “Doppelbock” aroma starts appearing depending on treatment. Maybe it makes sense to add O2 to 1/3rd of the bottles, no O2 and no yeast to another 1/3rd and yeast to a 3rd. This may allow brewers to control when the flavor/aroma of a Doppelbock (or other strong dark beer) peaks. An aspect that is very important for competitions.

It also shows that the beer was not completely fermented. Hence the continued fermentation when yeast was present which lead to higher carbonation and a lower refractometer reading.